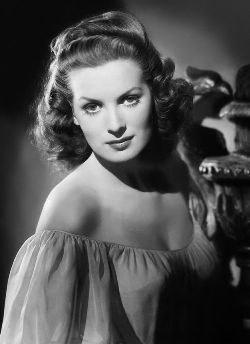 O’Hara was a young stage beauty when Charles Laughton became captivated by her eyes, put her under contract, and changed her name to O’Hara. While starting off her film career as a maiden in distress and a gypsy girl, she is best known for a stream of Swashbucklers. In each she played a “fiery” red head—a welcome change from the more timid female characters that filled the genre, but not entirely a successful one as these ended up more often annoying than strong. As such, only two of my top eight O’Hara films are Swashbucklers.

#8 – Jamaica Inn (1939) — An early Hitchcock thriller that has as much of Charles Laughton’s fingerprints on it as the director’s. It was O’Hara’s first big role and her first time using her screen name of “O’Hara” instead of “FitzSimons.”

#7 – The Spanish Main (1945) — A standard but enjoyable Swashbuckler with Paul Henreid as the noble pirate and O’Hara as her normal moody maiden. Call it a solid second tier adventure film. (Full Review)

#6 – The Quiet Man (1952) — An over-rated but still good dramady romance with John Wayne trying for a human role for a change and not quite making it. Romance, not to mention dramatic acting, was not in his range. Parts of the film are silly—the never ending fight and the cross-country dragging of O’Hara are the most obvious—but enough works, including O’Hara, to make it a fun film.

#5 – At Sword’s Point (1952) — A surprisingly good Swashbuckler considering the silly premise. The sons and daughter (O’Hara) of the original Musketeers must save France once again.

#4 – The Hunchback of Notre Dame (1939) — Charles Laughton again dominates a picture on this list, at least behind the scenes. He brought O’Hara into the production, and she outshines him. This is the best adaptation of the novel, and the one that influenced all those that followed.

#3 – The Parent Trap (1961) — A joyful family film that’s funny and romantic while escaping the saccharine tones that infected so many Disney films of the time. Hayley Mills plays identical twins attempting to reunite their divorced parents, Brian Keith and O’Hara.

#2 – Our Man in Havana (1959) — A darkly comedic satire on spies and politics, shot in Cuba just after the revolution. Alec Guinness stars as a vacuum cleaner salesmen who fakes being a spy. O’Hara is his assistant, sent from London to help him in his “fine” work. (Full Review)

#1 – Miracle on 34th Street (1947) — A Christmas classic. O’Hara is one of the romantic leads as a mother who doesn’t want her child to be raised with fantasy, but is overshadowed by Edmund Gwenn’s Kris Kringle. (Quick Review)