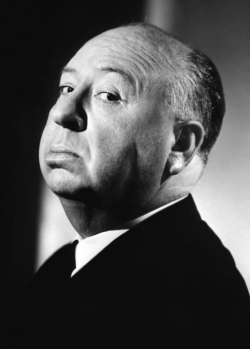 Normally my lists of the Best Films of the Great Directors will be top 10 lists, but for Hitchcock, I decided something more comprehensive was in order. He has plenty of masterpieces on his resume, but that doesn’t mean he hasn’t a few misfires—quite a few actually. And a few real stinkers: Frenzy…Wow…Just…Wow. So in ranking Hitchcock’s films, I’ll stick with the good ones. The rest I’ll group either with the complete failures or with the also-rans. After all, it doesn’t matter that Secret Agent is worse than Topaz if you should skip both.

Another factor with Hitchcock is that he was not the most original of directors. When he found something he liked, he stuck with it. Many of his films are variations on a single story and single theme and employ the same plot devices. He would build tension in the same way from film to film, and use similar climactic scenes. These tendencies do effect my ranking. Young and Innocent would rank higher if The 39 Steps and North by Northwest didn’t exist (not to mention Saboteaur).

I’m sticking to English language, feature talkies; there are 44 of them.

#17 – Mr. & Mrs. Smith (1941) — Strictly work-for-hire, the plot—a stupid and rich couple find out they aren’t really married—is pure screwball comedy, but Hitchcock had little interest or skill with that subgenre so it comes off as an uneven amalgamation of styles. Robert Montgomery lacked the charisma to play such an idiot (Cary Grant could have done marvels with it, and did so in a similarly-themed film) and Hitchcock didn’t know how to work with Carole Lombard. It’s just amusing enough to separate itself from the also-rans.

#16 – Blackmail (1929) — I can’t call this a great film, but it is fascinating. Britain’s first “all-talking picture,” has silent segments, poorly matched dubbing, and generally bizarre sound. It also has all the suspense and voyeurism that marked Hitchcock’s career.

#15 – Young and Innocent (1937) — Hitchcock made a lot of semi-remakes of The 39 Steps. This one is closest in tone. Espionage has been replaced by a normal murder, but otherwise it’s much the same and equally as enjoyable. By the way, were there a lot of Blackface bands at fancy hotels in 1937? It’s a pertinent question.

#14 – The Man Who Knew Too Much (1934) — Regular folks (well, regular rich folks) stumble into spies and an assassination plot. Their daughter is kidnapped and they set out to save her while staying very British. It’s a solid thriller, though only Peter Lorre and Cicely Oates, as the villains, are memorable. Points for lacking the song Que Sera, Sera.

#13 – The 39 Steps (1935) — The basis for the rest of his career, The 39 Steps is a spy thriller, as concerned with romance and marriage (and the trouble with that institution) as it is with suspense. Robert Donat is a bit dry for my liking, but is serviceable (and Hitchcock had plenty of chances to “re-cast”).

#12 – The Lady Vanishes (1938) — The Lady Vanishes is a fun spy romp, if uneven. As we know that the lady has indeed vanished, the thirty minutes of people saying she hasn’t get old, and the male lead is introduced as an ass, but eventually our couple get on the same page. While often pointed to as iconic Hitchcock, it is actually iconic Sidney Gilliat, a producer/writer/director—in this case writer. Two years later he would write the similarly-toned Night Train to Munich in the same shared universe, and include the comic characters Caldicott and Charters. He would later team with Frank Launder for a slate of comedies, including the St. Trinians films.

#11 – The Birds (1963) — As a whole I always find The Birds lacking. The characters are neither likable nor realistic, and incredibly stupid (maybe don’t ask “Why?” over and over of people who clearly don’t know). but it has moments that are some of the greatest ever filmed. The crows outside the school is enough to make this a must-see film.

#10 – Vertigo (1958) — Jimmy Stewart overacts and is miscast (Hitchcock blamed Stewart for the box office failure, and rightly so) and the early exposition scene is clunky (explaining to us what acrophobia is, their relationship, and that he’s quit the force even though the characters clearly would not be having the conversation at this time), but Kim Novak is solid (even if the director thought she was wrong for the part) and the colors sell the story. It’s Hitchcock finest use of color. The actors—and characters—can’t express the obsession the film wants to wallow in, but the cinematography can. Vertigo was pulled out of circulation for thirty years, so critics tend to overrate it, but it is still very good.  [Also on the James Stewart Great Actors List]

#9 – Rear Window (1954) — Hitchcock takes his obsession with voyeurism and makes it literal. As always Jimmy Stewart dialed it one notch too high (Hitchcock did little to direct him, letting him do as he pleased). The plot doesn’t matter. This is a film about watching a film.  [Also on the James Stewart Great Actors List]

#8 – Shadow of a Doubt (1943) — No spies here. This is evil slipping into a small town filled with innocent and stupid people. I find it the darkest of Hitchcock’s films because of that childlike world. Joseph Cotton often faded as a hero, but he simmers as the villain. The story maps on to Dracula, which gives it an extra layer. Like Vertigo, there are no surprises.

#7 – The Trouble with Harry (1955) — A very British comedy set in the US. Unlike Mr. & Mrs. Smith, this script plays to Hitchcock’s humorous strengths. The characters are quirky and exceptionally calm as they bury and rebury and re-rebury a body.

#6 – Psycho (1960) — I wonder if anyone nowadays understands the brilliance of the stunt-casting of Janet Leigh? Or if anyone at the time knew that Anthony Perkins would make such an impression as the killer that his career would never be able to escape it? Like The Birds, the parts are better than the whole, but those parts are fantastic. [Full Review]

#5 – Strangers on a Train (1951) —Farley Granger is the somewhat bland and angry hero who wants to divorce his cheating wife. Robert Walker is the psychopath who suggests they “trade murders” when they meet on a train. Granger’s work is very serious, but Walker inhabits an off-kilter world of pitch-black comedy. Hitchcock has never been sicker and more joyful.

#4 – Dial M for Murder (1954) — The perfect cozy mystery, its strength is in keeping the story focused and claustrophobic. It has been criticized (mistakenly) for its two greatest assets: not opening up the play and being very British. Ray Milland makes a wonderful urbane villain and John Williams is superb as the inspector. Both he and Grace Kelly would return the following year for the next film on this list. [Also on the Ray Milland Great Actors List]

#3 – To Catch a Thief (1955) — Cary Grant was Hitchcock’s best leading man, and here he is at his most Cary Grantish. This is Hitchcock in fun, adventure mode. Grace Kelly is one of the best of his icy blondes, and is a good equal for Grant. [Also on the Cary Grant Great Actors List]

#2 – North by Northwest (1959) — The culmination of Hitchcock’s career, it was all leading to this. He remade his innocent-on-the-run film until he got it perfect. This is perfect. [Also on the Cary Grant Great Actors List]

#1 – Notorious (1946) — Hitchcock’s masterpiece. A darker Cary Grant then normal, still charming, but with an edge. It’s spies and cruelty and self-loathing and love and it is remarkably moving. Ingrid Bergman is captivating and Claude Rains puts in another of his perfect supporting roles. [Also on the Cary Grant Great Actors List]