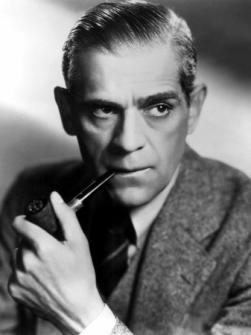 The second of the Big Three horror icons (Bela Lugosi, Boris Karloff, Lon Chaney Jr.), Boris Karloff found stardom with Frankenstein after struggling in silent films. He was grateful for his success and never minded being typecast, and typecast he was. If he wasn’t a monster, a monstrous servant, or a crazed killer, he was a mad doctor. His résumé includes dozens of roles that had “Dr” as part of the name.

As he has so many films that are worth seeing, but not absolutely essential, I have a greater number of honorable mentions than usual. One goes to the enjoyable The Raven (1963), and another to the incredible set design for The Black Cat (1934), and yet another to The Ghoul (1933), the first British horror film; it’s a solid old dark house film and Karloff is excellent. Also an honorable mention to Scarface (1932), which is an important film, but flawed—and Karloff is poor in it. And one more for The Mask of Fu Manchu (1932), which has multiple problems, but Karloff and Myrna Loy are amazing, and if “best” meant “favorite,” it would be on the list below. And a final mention for Five Star Final (1931), a look at the evils of yellow journalism starring Edward G. Robinson. Karloff plays a drunken and particularly sleazy agent of the paper who dresses as a priest to get information, which makes him not only the best supporting actor for that year (from #2 below), but also the second best.

A list of Karloff’s best performances would include his marvelous narration for How the Grinch Stole Christmas, a film which would take third on the list below, but I’m keeping it off the list for entirely arbitrary reasons. Karloff’s best list is solid all the way through, but it is top heavy.

His top films, starting at #8:

8 – Isle of the Dead (1945) – One of three collaborations with Val Lewton. A complicated character piece with a simple plot: a plague sweeping an island.

7 – The Old Dark House (1932) – A quirky film—part horror, part comedy, but not a horror comedy, directed by James Whale. A group of odd characters are stranded in a mysterious house. (My review)

6 – The Mummy (1932) – A retread of Dracula—a bit slow, but Karloff is wonderful as his second great monster. The first few minutes make it all worthwhile. (My review)

5 – Tower of London (1931) – A horror-tinged version of the story of Richard III. Karloff plays Mord,the executioner, who is Richard’s right hand man. and is essentially Richard’s darker aspect taken human form. It is another fantastic performance by Karloff, as well as star Basil Rathbone and a young Vincent Price. (My Review) [Also on the Vincent Price List]

3 – Son of Frankenstein (1939) – A surprisingly good third entry in the franchise. It is seeped in German expressionism. Karloff gets a reduced role; Basil Rathbone is the lead, but Lugosi steals the film as Ygor. (My review) [Also on the Bela Lugosi List]

1 – Bride of Frankenstein (1935) – Arguably the greatest horror film of all time, and the greatest sequel of all time. It is (without argument) Karloff’s best performance. (My review)