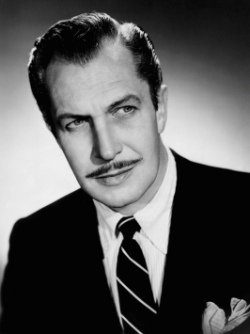 The 4th of the Big Three horror icons (of sound films), like Karloff before him, Vincent Price had a liquid-jeweled voice and range. Price’s early work was more often in Film Noirs, comedies, and a few adventure films. Except for brief sojourns, he didn’t switch to horror until 1953’s House of Wax, but once there, he was stuck for life. The shame wasn’t that he spent decades only able to make horror pictures, but that they were never A pictures. Still, he made many enjoyable B films and seemed happy.

Before the Best list, a few more honorable mentions than normal: An Honorable Mention for Abbott and Costello Meet Frankenstein (1948)—his part is too small to consider the film for his list. Then an honorable mention to The Invisible Man Returns (1940), which lacks in story, but Price talking to the scarecrow was a fantastic moment. Also an Honorable mention goes to His Kind of Woman (1951), which overall doesn’t quite work, but Price is wonderful in it. And a shout out to Witchfinder General (1968), which would be #9 below.

Which brings me to his best 8 films:

8 – The Last Man on Earth (1964) – The first and most accurate version of the novel “I Am Legend,” about a lone man fighting a world filled with vampires. Price and the theme makes this a must see.

7 – Tower of London (1939) – A horror-tinged version of the story of Richard III. Price is in a supporting role as the peevish Duke of Clarence who ends up on the wrong side of Basil Rathbone’s Richard and Boris Karloff’s Mord. (My Review) [Also on the Boris Karloff List]

6 – The Masque of the Red Death (1964) – I don’t normally connect Roger Corman with deep themes but then he never made another film like this. It’s surreal and epic. Price is an evil prince who thinks Satan will protect him from Death.

5 – Champagne for Caesar (1950) – The hardest to find film on this list. In this zany comedy, Ronald Colman plays a brilliant man who decides to bankrupt an arrogant businessman by winning a quiz show. Price is the businessman. [Also on the Ronald Colman list]

4 – The Fly (1958) – THE mad scientist film of the ‘50s. Unlike the remake, this isn’t a monster movie, but a tragedy. The main character isn’t the genus inventor nor his brother (Price), but the none-too-clever wife. Her emotional strain is beautifully played. (My Review)

3 – The Abominable Dr. Phibes (1971) – There aren’t enough art-deco horror films. And there are few that are anywhere near this witty. It’s elegant and violent with Price as a deranged musician out for revenge.

2 – The Ten Commandments (1956) – There are thoughtful and spiritual religious films. This isn’t one. This is the Bible via Lord of the Rings and Mad Max. And Price is capable of bombast with the best of them.  (My Review) [Also on both the Edward G. Robinson list and the Charlton Heston list]

1 – Laura (1944) – And as with Lugosi, this horror icon’s best film isn’t horror. It is one of the great Film Noirs, with Price as a playboy gigolo. (My Critique)