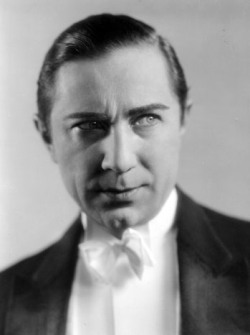 Lugosi had a presence, a charisma, that shaped scenes and entire films. Was he a good actor? It’s hard to say. He wasn’t really given a chance. With his thick accent and less-than-perfect English, his roles were going to be limited. Add in the tendency to pigeonhole horror actors and his own poor choices, and he ended up with a troubled career. But he had a few moments, and those have made him an icon.

For these “best of” lists for actors, I am not considering the actor’s best performances, but best movies. Nor am I worried about if the actor was the lead. Only when the actor has nothing but a brief cameo have I shifted great films into the “Honorable Mention” category (such as Audrey Hepburn’s few seconds in The Lavender Hill Mob). If it is more than one short scene, the film counts for that actor’s list. So, for Lugosi, I’ve ended up with three of my eight choices having him barely in the films. But even in those cases, he does make an impression.

An Honorable mention to Mark of the Vampire (1935) for the art design, cinematography, and for the iconic vampire pair of Lugosi and Carol Borland. And another honorable mention to the incredible set design for The Black Cat (1934).

8 – Frankenstein Meets the Wolf Man (1943) – Not a great film, but as the best of the Universal monster-mashups, it is fun. Lugosi’s performance is not good, but then his lines were cut in post. (My review)

6 – Abbott and Costello Meet Frankenstein (1948) – A surprisingly good horror comedy that treated the monsters respectfully. It was Lugosi’s second best outing as a vampire.

5 – Son of Frankenstein (1939) – A surprisingly good third entry in the franchise. It is seeped in German expressionism. Karloff gets a reduced role; Basil Rathbone is the lead, but Lugosi steals the film in what is probably his best performance as Ygor. (My review) [Also on the Basil Rathbone list and the Boris Karloff list]

4 – Island of Lost Souls (1932) – A powerful, thoughtful film with Charles Laughton as the evil scientist. Lugosi portrays a beast-man, a small but memorable part. (My review)

3 – Dracula (1931) – One of the greatest and most important horror films, Lugosi is stunning as Count Dracula. (My review)

2 – The Wolf Man (1941) – My personal favorite of the Universal monster movies. Lon Chaney, Claude Rains, and Evelyn Ankers are fantastic in this masterpiece. Lugosi has a small part as the initial werewolf. (My review)

1 – Ninotchka (1939) – Yes, the best film of the first horror icon of talking pictures is a comedy, but then it is one of the greatest comedies. Lugosi plays the Commissar that sends Greta Garbo’s Ninotchka to Paris where she meets the playboy count. [Also on the Great Directors list for Billy Wilder]