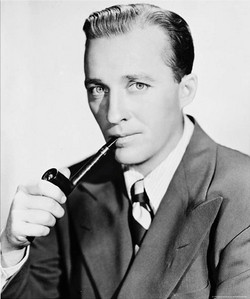 Some lists are hard. Some are easy. And some are pretty much repeats. This one is a repeat.

Crosby was primarily a pop/swing/jazz singer. He parlayed that into success in film and TV, but it was always music first. He had enough charisma—and his own staff of writers—to become a solid comedian. His best films were his collaborations with Bob Hope and Dorothy Lamour: the seven Road pictures. They were loose comedies with a few songs and a lot of patter, which was perfect for Crosby.

His most famous non-musical role was as Father Chuck O’Malley in Going My Way and its slightly superior sequel, The Bells of St. Mary’s. They are reasonably enjoyable in an overly-sweet, simplistic way, but far from the classics they were once thought to be. So what are Crosby’s classics? I’ve got them below, right after this Honorable mention: Road to Rio (1947) which is the one really good Road picture not on the list below.

8 – Robin and the 7 Hoods (1964) — The best of the Rat Pack (Frank Sinatra, Dean Martin, Sammy Davis Jr.) films, with Crosby taking over Peter Lawford’s part in the group.

7 – Road to Bali (1952) — The 6th of 7 Road pictures, Bali is a return to form as Hope and Crosby go to the South Seas, and toss off a non-stop string of one-liners while breaking the 4th wall. It’s wacky and fun. (Full Review) [Also on the Bob Hope list]

6 – Road to Zanzibar (1941) — The 2nd Road picture has Hope, Crosby, and Lamour spoofing (or just inhabiting) a jungle picture. It is one of the less wild outings, with the 4th wall unbroken. (Full Review) [Also on the Bob Hope list]

5 – Road to Utopia (1945) — The Road pictures were at full steam here as our three are in Alaska during the gold rush, but all that matters are jokes. (Full Review) [Also on the Bob Hope list]

4 – White Christmas (1954) — Is there a better icon of the light, colorful, and joyfully shallow side to Christmas than this bright and shiny musical? Obviously I think not. (Full Review)

3 – Road to Singapore (1940) — The first Road picture with Hope and Crosby playing characters and sticking with a plot. Dorthy Lamour is an Island fantasy, which was her gig at the time. It’s the only Road picture where you might care about something other than the jokes. (Full Review) [Also on the Bob Hope list]

2 – Holiday Inn (1942) — Fred Astaire gets to play the bad guy, messing up Crosby’s love life. This is a perfect holiday movie for pretty much every holiday as it has songs for New Years, Valentine’s Day, Easter, the 4th of July, and Washington’s Birthday, though the black face Lincoln’s Birthday number might be a hard sell. It also includes the song “White Christmas” and it was from this film’s re-recorded sound track that it became a hit. [Also on the Fred Astaire list]

1 – Road to Morocco (1942) — Ah, where to start. Many people claim this is the funniest movie of all time and I wouldn’t argue that. It is absurd, with no concern about the rules of filmmaking. Hope and Crosby talk to the audience, they refer to the last film and their contracts, and its all brilliant. Even the songs are good for a change. (Full Review) [Also on the Bob Hope list]