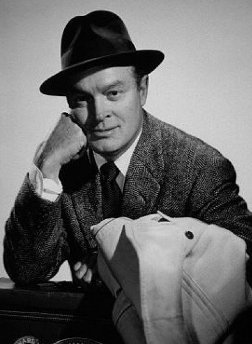 Sure, I’m still doing these–and one I was working on required some re-watching, so I went with Hope for today. Bob Hope was such a dominant comedian when I was a kid that is is bizarre to see how he is slipping from public consciousness. He also wan’t a very good comic when I was young, but he had been, years earlier. In the ’40s he was one of the best, producing a string of hysterical films. He’d been a stage and radio comic first, and that background was always with him. His routine was always verbal, and quick. His weak spot was one shared by many of the other comics and teams–he was repetitive. He always played more or less the same guy and did more or less the same jokes. They generally worked, but it makes a Hope marathon a bad idea. But then he had reason to keep doing the same thing–it worked, at least for a time. His better films tended to fall into three groupings: the Road pictures with Bing Crosby and Dorothy Lamour; the “My Favorite” pictures where he was mistaken for a spy or PI and got mixed up in espionage; his period costume comedies, which usually had people again mistaking him for someone important.

I’ve been doing 8 films per actor, but I’m enlarging that with Hope because otherwise this would be close to just listing the Road pictures. Additionally, most of the non-Road pictures on this list are very close in quality (and in the jokes and characters…), so much so that they are good, but interchangeable.

Honorable mentions go to The Cat and the Canary (1939) and The Ghost Breakers (1940), both of which have some brilliant horror stuff (the zombie scenes in The Ghost Breakers are must-sees for horror fans) but are brought down by other elements.

12 – Road to Rio (1947) – The 5th Road picture and 6th in quality, Rio is good, but pales next to earlier ones. The songs are forgettable and stop the film and the jokes are old, but the boys have a few laughs still in them. [Also on the Bing Crosby list]

11 – My Favorite Spy (1951) – Winning out over My Favorite Blonde on the sex appeal Hedy Lamarr. If she isn’t your type, then best to choose one of the other similar films.

10 – The Paleface (1948) – Hope in Western garb. He’s a dentist who’s mistaken for a gunman. Jane Russel handles the plot, trying to discover who is selling guns to the Indians. (Yup, it’s racist, but hey, it’s a lot less racist than The Ghost Breakers…)

9 – The Princess and the Pirate (1944) – Hope in Pirate garb. This one is lavish and in bright color with great character actors surrounding Hope.

8 – My Favorite Brunette (1947) – Hope teams with his Road picture co-star Dorothy Lamour in a Noir spoof that has him battling Peter Lorre and Lon Chaney Jr.

7 – Monsieur Beaucaire (1946) – Hope in French revolution garb. This one takes its swashing and buckling more seriously by adding a young male lead to carry the action.

6 – Road to Bali (1952) – The 6th of 7 Road pictures (only the much later Hong Kong doesn’t make this list), Bali is a return to form as Hope and Crosby go to the South Seas, and toss off a non-stop string of one-liners while breaking the 4th wall. It’s wacky and fun. [Also on the Bing Crosby list]

5 – Road to Zanzibar (1941) – The 2nd Road picture has Hope, Crosby, and Lamour spoofing (or just inhabiting) a jungle picture. It is one of the less wild outings, with the 4th wall unbroken. [Also on the Bing Crosby list]

4 – Road to Utopia (1945) – The Road pictures were at full steam here as our three are in Alaska during the gold rush, but all that matters are jokes. [Also on the Bing Crosby list]

3 – Road to Singapore (1940) – The first Road picture and things are a bit different, with Hope and Crosby playing characters and sticking with the plot. Dorthy Lamour is an Island fantasy, which was her gig at the time. It’s the only Road picture where you might care about something other than if the jokes are funny. [Also on the Bing Crosby list]

2 – The Lemon Drop Kid (1951) – Based on a Damon Runyon story, this one is different for Hope in that story and character trump actor. Yes, Hope is still playing a variation on his typical character, but he keep it within the lines. The humor comes from the good natured street criminals of New York dealing with sweet old ladies as they try and do a good thing. It introduced the song Silver Bells, making it a Xmas classic.

1 – Road to Morocco (1942) – Ah, where to start. Many people claim this is the funniest movie of all times and I wouldn’t argue that. It is absurd, with no concern about the rules of filmmaking. Hope and Crosby talk to the audience, they refer to the last film and their contracts, and its all brilliant. Even the songs are good for a change. [Also on the Bing Crosby list]