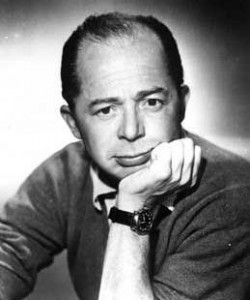 Wilder started as a writer, first in Berlin, then in the US where he worked on the masterpiece Ninotchka before he added directing to his resume. He is probably the finest writer/director of all time.

The thing that people sometime miss with Wilder is that he always made comedies, just sometimes those comedies pretended to be dramas. He excelled in pitch black comedies, where murder was part of the gag. Double Indemnity only makes sense when you look at it as the wonderfully nasty little comedy that it is. Wilder was known as a cynic, and that’s clear in practically every film. He was also a bit of a romantic which blends remarkably well with his harsh view of society and humanity.

This is a list of Wilder’s best films as a director, not writer, though the only change would be Ninotchka taking a high position.

Another honorable mention goes to The Front Page (1974); it’s reasonably faithful to the stage play and feels even more faithful. It was cynical enough already that Wilder didn’t need to change a thing.

And finally an honorable mention for Ace in the Hole (1951), which would have taken the #8 slot if the last act was half as strong as the first two. It’s more cynical than Sunset Boulevard and nastier than Double Indemnity. When it gets this dark, is a dark comedy still a comedy? Kirk Douglas stars as a twisted reporter who uses a cave-in to his own advantage, and so does everyone else. This has to be a comedy, because if you take it as a drama, it’s too harsh to handle.

8 – Kiss Me Stupid (1964) —  It’s a satire, and people who somehow think it is a romantic comedy get very upset when they see that the male characters are all slime. Yes, as a romantic comedy it isn’t good. It’s also pretty bad as a western and as a documentary on ancient China. As a vicious satire on small town America, celebrity, and the American way of life, it’s kinda brilliant.

7 – Sabrina (1954) — Sabrina (Audrey Hepburn), the chauffeur’s daughter, has a crush on David (William Holden), the playboy of the house. When time abroad turns her into a suitable target for his shallow affections, older brother Linus (Humphrey Bogart) sees trouble and tries to break things up. Hepburn is an obvious choice for a romantic comedy, but Bogart? But it works. [Also on the Great Actors Lists for Humphrey Bogart, William Holden, and Audrey Hepburn]

6 – Stalag 17 (1953) — I really don’t know how Wilder pulled this off. No one else could have. It’s a dark prisoner-of-war film where the Nazis are taken quite seriously and yet it bounces into pure comedy, before bouncing back into drama. William Holden, in one of three great films he made with Wilder, plays a selfish, cynical hustler who deals with the Germans… And he’s the hero. He won the Oscar for his performance, and he deserved to. [Also on the Great Actors List for William Holden]

5 – Witness for the Prosecution (1957) — A courtroom thriller, it is the best adaptation of an Agatha Christie story, and is often mistaken for a Hitchcock film. It’s Marlene Dietrich’s best film, and arguably Charles Laughton’s. The rest of the cast (Tyrone Power, Elsa Lanchester, John Williams, Una O’Connor) all sparkle. The dialog is fast and funny, and the mystery is solid, with one of the great film twists.

4 – The Seven Year Itch (1955) — Perhaps the perfect sex comedy (cleaned up for ‘50s morality), it is a witty farce where a married man, left alone for the summer, fantasizes about the bombshell who moves in upstairs. While Wilder may have found working with Marilyn Monroe a chore, he sure knew what to do with her, directing two of her four great starring roles.

2 – Sunset Boulevard (1950) — Sunset Boulevard takes on the film world, which it loves and loathes simultaneously, showing how it uses up people. It’s a twisted comedy that sees life through a fun-house mirror. It has amazing performances and Wilder’s most interesting cinematography; it’s one of the top Noirs. (Full critique) [Also on the Great Actors List for William Holden]

1 – Some Like It Hot (1959) — Often cited as the greatest comedy of all time, it is certainly a contender. If you haven’t’ seen it, go see it now. It’s a buddy, drag, romantic comedy with gangsters and music. What’s not to love? [Also on the Great Actors List for Jack Lemmon]