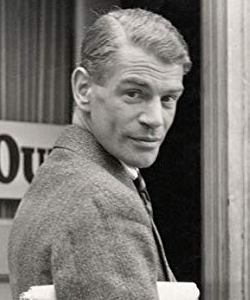 His background was in set design, but he learned directing quickly and had his own style that elevated him above the other directors of the time. He looked at the world as a gothic playground, filled with the strange and wonderful and terrible. Even when the material was less then brilliant (silly melodramas were the rage in the early ‘30s), Whale’s style could make the picture interesting.

He is mostly remembered now for his horror pictures, though he directed more melodramas than monster movies, and also made a good number of comedies. His career died with the release of The Road Back (1937), a sequel to All Quiet on the Western Front. Rumor has it that Whale’s cut was good, but we’ll never know as Universal, recently under new management, gave in to German demands and edited the picture to remove content that the Nazi’s found unflattering. Whale was not silent with his feelings about the management of Universal, which resulted in him finishing up his contract assigned to poor projects.

He only made 21 films before retiring in his early fifties. While he can be considered one of the truly great film directors, a majority of those films are deeply flawed, suffering most from terrible acting, though the ridiculous scripts come in a close second. I can’t say why he didn’t rein in his actors when they were emoting all over the walls. I cannot understand how he made the overwrought nonsense The Kiss Before the Mirror the same year he made the masterpiece The Invisible Man. But when he could find the right actors, and the right script for his mentality, he could create marvels. And I enjoy at least parts of even his worst films because there’s always something special in them.

I’ll give an honorable mention to WaterlooBridge (1931) simply because it is the only film of his beyond the eight below that approaches being good.

#8 – By Candlelight (1933) — A romantic comedy of mistaken identities and class conflict. The casting doesn’t quite work, but Whale is in fine form, if not particularly flamboyant, and the end product has a subtle charm.

#7 – Remember Last Night? (1935) — A bunch of terrible rich people have a wild drunken party and wake up the next day with no memory and a dead body. The two most likable of the crew set out to solve the mystery before they get arrested. It is genius for the first two acts, but slips toward the end simply by becoming more conventional. I think of it as The Old Dark House with bright lights.

#6 – The Old Dark House (1932) — The signature James Whale film—his mastery of shadow and movement, control of everything in the frame, and exuberant and quirky sense of humor. But The Old Dark House has nothing but Whale’s style, but that style is enough. [Also on The Great Actors List for Boris Karloff] (My review)

#5 – Show Boat (1936) — The main melodramatic storyline was tiring on stage and is equally so here (though it really does manage to jerk the tears), but the racial material is dynamite (and was at the time, needing a special exemption from the censors to cover mixed-race marriage, a subject the censors were “protecting” people from…), and multiple songs are classics. I could have used a lot more of the Black characters and less of the leads, but still, this is a movie to see. Consider it an antidote to Gone With the Wind. Though successful, it broke a studio and killed the Laemmle dynasty.

#4 – The Great Garrick (1937) — One of the best comedies of ’37, in which a band of French actors attempt to humiliate the English star David Garrick by pretending to be all of the workers and guests at a country inn, but things become complicated when an unconnected woman (Olivia de Havilland) stumbles into their performance. The supporting cast, including Edward Everett Horton, are as good as the leads. [Also on The Great Actors List for Olivia de Havilland]

#3 – The Invisible Man (1933) — Whale’s second Universal Monster is almost as good as his first, and skating on a major success, he relaxed and let himself go, adding a great deal of comedy. It was also the big break for the greatest character actor of all time, Claude Rains.

#2 – Frankenstein (1931) — How many films have had this kind of effect on pop culture? The Monster that is as iconic as Mickey Mouse is not from the book, but was created here, a combination of the creative minds of Whale, actor Boris Karloff, and makeup expert Jack Pierce. The theme that science should not mess in the realm of God is not actually the theme of this film, but people thought it was, and so started a non-stop river of mad scientist films, none of which came close to this one or its sequel. [Also on The Great Actors List for Boris Karloff] (My review)

#1 – Bride of Frankenstein (1935) — Arguably the greatest horror film of all time, and the greatest sequel of all time. It is (without argument) Boris Karloff’s best performance. With Frankenstein, Whale held back a bit, but with this film, he gave in completely to his instincts. It is weird and wild. Sure it is horror, but it is also black comedy and satire. [Also on The Great Actors List for Boris Karloff] (My review)