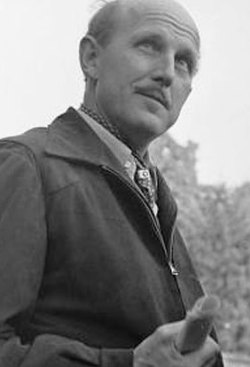 My bio for Michael Powell is a bit longer then usual as people who don’t breath cinema don’t seem to know him.

Powell has been called the greatest British director by those more knowledgeable than I, and I wouldn’t argue the point. His films wrap me into other realities. More than any other director on my Great Director’s Lists, his films stand apart—no one makes films that look like his. He was a perfectionist, and a fiend in demanding things be his way, yet he was open to the ideas of his casts and crews, or sometimes just let them work it out, and shared power and tasks with his producing partner Emeric Pressburger.

Powell’s films are symbolic and surreal. Mundane reality had little interest for him, though he would merge documentary style filmmaking with his narrative strangeness. His themes often involve obsession, particularly for art, as well as the suffering that caused. He would compare our normal society to something outside it, something more fundamental. That otherness was “better” but also more dangerous. It was beyond our understanding, and so likely to destroy us.

His creed was “All art is one.” Film was the best form because it could encompass all the others. He sought to integrate theater and dance and song and painting, and he succeeded.

He learned his craft turning out Quota Quickies in the 1930s. In 1939 Alexander Korda teamed Powell with screenwriter Pressburger and the two got along so well they formed a production partnership that lasted nearly twenty years during which they credited directing, writing, and producing under the name The Archers. Since Powell did a majority of the directing, and this is a list for directors, I’m calling it a Michael Powell list, although most of the films belong to both of them equally.

The Archers spent the next 8 years making a combination of B&W wartime propaganda films and existential epics. Given a nearly free hand by the Rank organization, these later films were like nothing else. What really stood out was their incredible use of color (often in collaboration with cinematographer Jack Cardiff). It upset the Technicolor technicians greatly as Powell refused to do things the normal way. These include some of the finest films ever made, and unquestionably the most beautiful.

The Archers era of color extravaganzas ended when J. Arthur Rank decided The Red Shoes would be a flop (he was wrong), so severed relations with the Archers, sending them back to Korda, and less freedom and less money. The results were mixed, and when that relationship soured, The Archers found themselves without backing, and eventually dissolved the company.

On his own, Powell directed Peeping Tom, a voyeuristic psycho-killer film that is now greatly revered, but in 1960 shocked and disgusted both critics and audiences and was pulled from theaters, mostly ending his career in England. He made a few more films in Germany and Australia, and re-teamed with Pressburger on one of those and a final children’s movie.

It’s tempting to switch from my normal top 8 to a top 10 or 12 for Powell, but I’ll just include a few extra honorable mentions

The first goes to The Phantom Light (1935), an enjoyable Quota Quickie Old Dark House movie, set in a lighthouse (My review). And an honorable mention to Contraband {aka Blackout} (1940), the second of two wartime pictures staring Valerie Hobson and Condrad Veidt (the first is below). It’s a mix of propaganda and Hitchcockian spy thriller. Next a pair of honorable mentions to The Life and Death of Colonel Blimp (1943) and A Matter of Life and Death (1946), the first two of The Archers’ series of spectacularly beautiful color films.

Finally two more honorable mentions to films I was sure were going to make the top 8 when I started this. The Battle of the River Plate {Pursuit of the Graf Spee} (1956) is an unusual war picture. The first half has all the combat, but the picture really takes off when the ships are sitting still and politics and trickery take over. 49th Parallel (1941) is propaganda raised to art. It makes the Nazi survivors of a doomed U-boat human, which makes them more dangerous.

And a pair of dishonorable mentions to two ill-considered British/American collaborations arranged by Korda, where the Hollywood moguls forced casting choices that didn’t fit or were against the wishes of the actors (who then sabotaged production), fought everything The Archers were doing, didn’t keep up their side of the financial agreements, and mangled the final product for American release. To be fair, The Archers don’t get away without blame as they knew what they were getting into (or should have known) yet refused to adjust to the situations when clearly they should have. The first of these is Gone to Earth (1950) made in “cooperation” with David O. Selznick, who massively cut the film and inserted new scenes for the US and released it as The Wild Heart. (And yes, Selznick’s wife, Jennifer Jones, was gorgeous in the lead, but also easily a decade too old), The other is The Elusive Pimpernel (1950), this time made with the “support” of Samuel Goldwyn (My Review).

So, onto the best of the best:

#8 – The Spy in Black (1939) — This is the first of the Hobson/Veidt films. This time Veidt is a German submarine captain with nefarious plans in the UK and Hobson is his spy contact. There are crosses and double-crosses. It’s more serious than their next outing would be, though nearly as much fun and overall a bit smarter. This and Contraband would rank higher, as they are both entertaining and high quality, but they use only The Archers’ skill, not their idiosyncratic view of the world.

#7 – The Edge of the World (1937) — After 21 films, Powell finally had the freedom to make what he wanted. It tells the story of the hardships and abandonment of an island in the Outer Hebrides. It is the precursor of what would come after as it’s all here: themes of tradition vs the modern world, man vs nature, the mystical vs the mundane, outsiders vs society, life vs death, and grief. It contains a general feeling that the universe is beyond our understanding. It has beautiful cinematography as well as sometimes a documentary feel. The ending of the plot is weak, but the story isn’t the plot. This is one of two non-Archers film on this list.

#6 – The Red Shoes (1948) — Probably The Archers’ most famous work, I suspect some fans might find my rating a bit low. It is, after all, stunning from the first frame. One can spend the entire length of the film gazing, gap-mouthed, at the colors that shouldn’t be possible. The Red Shoes Ballet portion is enough to get this on any list of the great films. But the script lacks subtlety and the actors, mostly chosen for their dance skills, overplay their parts, so 6th is about right.

#5 – The Small Back Room {Hour of Glory} (1949) — Leaving The Rank Organization meant The Archers didn’t have money for huge, beautiful, Technicolor marvels, so they made an intimate, beautiful, B&W marvel. The plot follows a bitter, alcoholic bomb specialist as he investigates a new German device during WWII, but the story deals with his psychological trials and failings. The film reunites David Farrar and Kathleen Byron from Black Narcissus. It’s tense and thoughtful, taking some shots at British politics and society between the more personal moments.

#4 – Bluebeard’s Castle {Herzog Blaubarts Burg} (1963) — Seldom seen, this is an amazing, colorful, and compelling film opera. The Archers’ longtime production designer Hein Heckroth called Powell to come to Germany and make this film for TV. It’s the second of two non-Archers films on this list. (My full review)

#3 – The Tales of Hoffmann (1951) — This is the ultimate example of Powell’s “composed cinema,” where the film is put together from separately created pieces—and as they are separate, they can be the best in their specific areas. It’s a combination of ballet, opera, theater, poetry, architecture & design, and painting, encompassed in the tricks of a motion picture. This is art in pure form. (My full review)

#2 – I Know Where I’m Going! (1945) — A magical realist fable that’s pure Archers. Wendy Hiller stars as an obscenely practical yet somehow likeable woman who travels out of her normal world to marry for money and power, but the universe gets in the way.