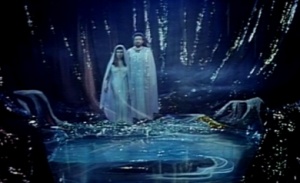 Judith (Ana Raquel Satre) has abandoned her family and fiancé to run off with the powerful and disreputable Bluebeard (Norman Foster) to his imposing castle. Rumors abound of his foul deeds, and he gruffly tries to warn her off, but she insists that she wants him and will stay. As he softens a bit, she discovers seven locked doors and asks to be allowed to enter them. He refuses, but she continues to press, until he relents, door by door. Behind each is a magical secret, some best left unknown.

I’ve always said I’m not an opera guy. I respect opera, but don’t enjoy it. Well, watching Bluebeard’s Castle a week after The Tales of Hoffmann, I may have to change that. The film entranced me. The music is powerful and emotional. But then maybe I just like opera in the hands of director Michael Powell; I pulled up another film version of Bluebeard’s Castle from the ’80s, and while the singing was still impressive, my attention wandered.

By 1962, Powell and longtime producing partner Emeric Pressburger had gone their separate ways, and Powell’s solo effort, Peeping Tom, had so enraged critics and audiences that his career was dead in the water. Then he got a call from frequent collaborator Hein Heckroth, who’d been the production/artistic designer or costumer on A Matter of Life and Death, Black Narcissus, The Red Shoes, The Small Back Room, Gone to Earth, The Fighting Pimpernel, The Tales of Hoffmann, Oh…Rosalinda!!, and The Battle of the River Plate. Opera singer Norman Foster wanted to produce a pair of films for West German TV based on the works of Béla Bartók, and he needed a director. The first would be the operatic Bluebeard’s Castle while the second would be a ballet (and was never made). Money would be tight, but they had Technicolor film and Heckroth was doing the design, so Powell signed on.

Bartók was prime material for Powell. His opera involved questions of the importance of art and the guilt of the voyeur. It dealt with the quest for eternal beauty (and if that was a foolish quest) and the suffering of the artist. Everything is direct and also everything is symbolic. Are the events happening in a castle or inside a man’s mind? This is the kind of thing Powell loved and knew how to play with.

What he made is a small marvel (Powell generally made one kind of marvel or another), though I’m not sure if I shouldn’t give the greater credit to Heckroth. Working with only the barest of resources and two assistants, Heckroth designed and then built an incredible, surreal world. It’s less like watching a film and more like twirling in an art museum until it all merges and you fall over. Everything is beautiful and nonsensical. Powell remarked how pleased he was that everyone got back to basics, just using their artistry.

I’m focusing on the artists behind the camera, as if the two in front of it don’t matter, but they do. Both have the kinds of voices that you only get from deals with devils. Every line is a joy. Foster was the bigger star and he saw this as a vehicle for himself, and he had the chops, but he was wrong. Satre eclipses him. She’s like a mad nymph. Or maybe Powell just knew how to capture her sensuality, and then spread it over Hechroth’s backgrounds.

This is a very strange film: confined but expansive, simple yet layered, operatic and also conversational. It may not be for everyone, but is rewarding for anyone willing to give themselves to it.