Five nuns are sent into the Himalayas to turn an ex-pleasure palace into a nunnery. A previous attempt to make it a monastery had failed for unstated reasons. Youthful and arrogant Sister Clodagh (Deborah Kerr) is made mother superior. She is given: Sister Philippa (Flora Robson), to run the garden; Sister Honey (Jenny Laird), because she is well liked; Sister Briony (Judith Furse), for strength; and Sister Ruth (Kathleen Byron), because she needs something she isn’t currently getting as a nun. They are aided by “The Old General” (Esmond Knight), who rules the area, and his son (Sabu), who sees himself as a cultured Western man, Angu Ayah (May Hallatt), the caretaker who’d rather have a harem inhabiting the building once again than nuns, and Mr. Dean (David Farrar), an English adventurer who’s made the local village his home. Conditions, including the altitude, make their task difficult, including having to look after Kanchi (Jean Simmons), a sexually charged orphan. But it isn’t physical and social issues that cause them the greatest problems, but something harder to define, that tears at their carefully controlled view of the world.

Here is a film I feel inadequate to describe, because one needs to be a poet to even approach it. Black Narcissus is the most beautiful film ever made. It is a masterpiece of amorous color. It is the height of cinema art, and is on the short list of the greatest films of all time. It is gorgeous to look at, subversive, and like nothing else.

The filmmaking team of Michael Powell and Emeric Pressburger, along with cinematographer Jack Cardiff knew what they wanted—a film that was direct kin to paintings. Cardiff took Dutch painter Vermeer as his starting place. This drove the advisors from Technicolor to distraction (Technicolor is/was a very complicated system and the company always kept their own people on set, dictating lighting and colors). The filmmakers pushed the procedure past its edges, creating imagery like no other. One day the Technicolor folks announced that the previous days shots were unusable and projected them to show the team how they were a disaster; they were perfect, simply not the norm.

While Powell has been told by people who’ve been to the Himalayas that they’ve seen where the film was shot, it was actually all on a sound stage (and in an English park). The mountains and valleys are all map paintings. They look real, and yet the entire picture has an unreal feeling that is greatly to its benefit.

Strangely, what comes to mind while watching Black Narcissus is Lovecraft, and only partly because it turns into a horror film in the last act. Mainly it is because the movie gives us a feeling of this vast unknown world, that is terrible and wondrous and very dangerous. We live in a lie, a construct we’ve built around ourselves to keep the universe ordered. To some extent we need this lie as we cannot comprehend what is beyond it. Of course it cuts us off from what really matters, what truly exists, but it also keeps us sane. You have a choice, to either dive into the real world and become lost in it, to flow with it, never looking too far or questioning it, or get the hell back into your fake box and stay there. Attempting to impose your will, your construct, onto the larger world will not end well for you.

With that running through the film, its two themes are easy to see, and both have to do with repression. The nuns are clearly repressed (that’s why you make a film using the iconography of nuns), but it isn’t a religious matter. They are repressed much like every other English man or woman. We are all repressed, hiding from the sensual, the carnal that pulls us, and we lose so much. But Black Narcissus isn’t dealing purely with the individual, but also with colonialism, making this a very odd film for its day. A lascivious, anti-colonial British film was unknown in 1947. The British had, for centuries, attempted to mold the world in their image. In the end, it simply mangled societies. It’s not just a morally problematic thing to do; it is impossible.

Subtext rules Black Narcissus (the title comes from a cheap British cologne that the Young General douses himself). The story is not the plot, though they travel in parallel, and much of what happens in the plot is explained by the subtext. Sure, you can say that stress and altitude sickness is what starts to break the nuns, but the colors and shots say something different. 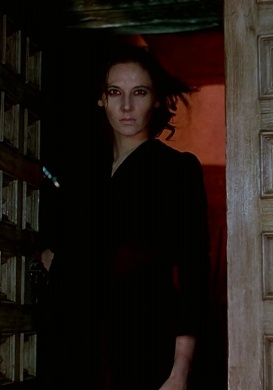 The Academy gave Black Narcissus the Oscars for cinematography and art direction (they’d have looked pretty silly if they hadn’t), but nothing more. It should have won for Brian Easdale’s other-worldly score. The climax was filmed to match the already composed music, and not the other way around. Similarly they ignored Deborah Kerr who should have won for Best Actress, but far worse, Kathleen Byron for Best Supporting Actress. Byron’s Sister Ruth is one of cinema’s greatest characters, and it is her, putting on red lipstick, escaping through the forest to a beat straight out of I Walked With a Zombie, and her crazed appearance in the doorway, that is seared into my brain.