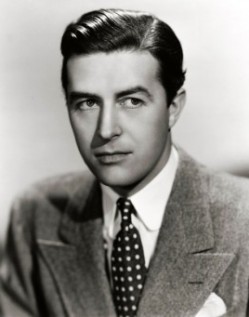 Handsome and debonair, Milland’s early career was mainly in romantic comedies and light action films. His big break came with The Jungle Princess (1936), which made Dorothy Lamour a star as The Sarong Girl. His reputation changed with The Lost Weekend (1945) which won multiple Oscars, but is hard to view as anything other than suffering-porn now—it lacks a plot and an ending. It was no doubt important for people who never realized that alcoholism was bad. But this did alert Hollywood to his skill as a serious actor.

Now for his eight best:

8 – The Lady Has Plans (1942) — A spy comedy as light as fluff. With Paulette Goddard, Milland’s frequent co-star.

7 – The Major and the Minor (1942) — 31-year-old Ginger Rogers pretends to be a child to get a half price train ticket and ends up with Milland at a military school. As this is a romantic comedy, they’d never make it today. [Also on the Ginger Rogers list]

6 – Ministry of Fear (1944) — A light thriller with Milland just out of an asylum facing Nazis. It screams Hitchcock.

5 – Easy Living (1937) — A Preston Sturges penned romantic comedy entwined with the misunderstandings of the very rich.

3 – The Big Clock (1948) — One of the great Film Noirs as Milland is placed in charge of an investigation to find a man who turns out to be himself. Remade in ’87 as No Way Out with Kevin Costner. (Full Critique)

2 – Beau Geste (1939) — The definitive Foreign Legion film, with Milland one of three brothers who run off for the sake of honor.

1 – The Uninvited (1944) — The greatest ghost film, and the mold for most of those that have followed. Milland and his sister buy a house which turns out to be haunted. (Full Review)