A meteor strike on a lighthouse creates The Shimmer, an area of strange plant and animal growth. No one who enters has ever returned and no communication from within has been received. Then Kane (Oscar Isaac), who’s been missing for a year after entering The Shimmer, appears in his house and begins spitting up blood. His soldier-scientist wife Lena (Natalie Portman) is brought to the secret Southern Reach base, where they keep Kane in seclusion. Lena joins the next team that will be entering The Shimmer, along with psychologist Dr. Ventress (Jennifer Jason Leigh), paramedic Anya (Gina Rodriguez), geomorphologist Cass (Tuva Novotny), and physicist Josie (Tessa Thompson). Once inside The Shimmer, they find mutated plants and animals everywhere, many dangerous, and little that makes sense.

I liked Jeff VanderMeer’s novel, but would never have chosen to make a movie from it. But then Alex Garland (late of Ex Machina) really didn’t. He made a movie of things he vaguely remembered from the book. The characters don’t feel the same, the plot is only loosely connected, and the theme is different. There’s really not much from the book except “weird area,” odd female team, and a lighthouse. Changing the story from that of the book was a good plan as I call it un-filmable as is, but Garland lacked a clear vision. He knew he wanted a cool looking Shimmer, but beyond that he never decided on a story.

His plot isn’t much: The team traipses through the mysterious land on their way to the lighthouse, and strange stuff happens. That’s OK. He didn’t need a lot of plot if he had something else to offer. Theme is the obvious place to go, and Annihilation has a theme: self-destruction. That’s rammed down our throats pretty hard. Great. But he has nothing to say about it. What about self-destruction? What insight does he have to offer other than the word “self-destruction”? Fine, films aren’t good with thought anyway; they are about emotion. But Annihilation doesn’t make us feel anything about self-destruction either. It is tense, and no doubt it will make many viewers tense, but “tense” is not the same as self-destructive.

To make us feel what it needed to, to feel something about self-destruction, Garland would have had to focus it through the characters, and that’s where things go really wrong. The characters don’t work. Lena is the major problem as she’s our portal, but we learn nothing about her. We spend a lot of time with her in an excessive number of flashbacks—I’m pretty sure there are flashbacks in flashbacks—but we get nothing from her in those. Portman plays it with maximum steeliness. We are not brought into her life, to feel what she feels and to empathize. We are kept on the outside, looking in, ticking off boxes. She’s a biologist; check. She’s had an affair; check. None of it means anything. We aren’t shown, but told (just as in an incredibly awkward conversation Cass rattles off each one of the women’s psychological problems—just telling us, not making us feel them). That doesn’t mean we aren’t shown that these women are a mess, but not in any way that relates to who they are and what they’ve gone through. They’re just all unstable. And as this is cinema, where realism rules unless shown otherwise, there really needs to be a reason why any of these five would be allowed to go on any mission. The actual reason for the character’s strange behavior—and I suspect many of the somnambulist acting choices—is that they acted odd in the book. They act hypnotized here because they were hypnotized in the book. But they aren’t in the film. That plot thread is missing. Likewise Ventress was creepy because she was using post-hypnotic suggestions to get the others to do problematic things—but that’s not in the movie. So they should have been behaving like humans, and having reasonable conversations. But oh well, that doesn’t happen. 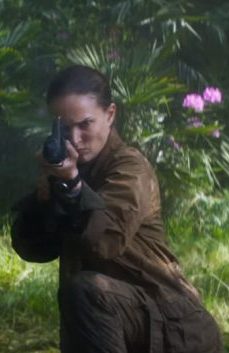 The critics who like this movie keep saying this is “smart science fiction.” No. No it is not. There is close to zero science fiction in this film. It is fantasy. These scientists do not do science. Cass and Anya do nothing at all that could be considered competent. The only psychology Dr. Ventress manages is to blurt out that everyone is self-destructive. Lena just picks up samples, says the word “mutation” a lot, and looks at cells under a microscope that always are dividing when she glances. As for the physicist, her only contribution in the entire film is to say that The Shimmer is refracting everything, including genes. That’s not physics. That’s not a scientific statement. It barely has meaning at all, and the little it does have is poetic. That’s all fine, but these are supposed to be scientists doing…science, instead of whatever the hell it is they are doing. But then they have no plan of any kind. Really, they have no idea what they are doing, where they are going, what to do if something goes wrong, etc. (Maybe a planning meeting might have been a good idea.) This is not smart science fiction. It’s pulp adventure, more or less.

Garland had to come up with an ending as the book wasn’t going to help him there, so he did. He answered all the questions and ties things up. His answers don’t mean anything and his way of tying things up comes out of nowhere, is not earned, and screams of having no idea what to do with the material (which I’m sure is the case since Garland proudly said that he didn’t reread the book nor ever pick up the other two volumes). But I suppose having an ending is better than the alternative.

OK, it isn’t all a train wreck. There’s some fine art design involved with The Shimmer and the outdoor cinematography is generally very good. And as mentioned, it is tense. So if you want a dumb little dark adventure flick about dim unrealistic characters traveling through cool sets and fighting nasty mutants, then this will do. Looking for smart science fiction, or depth, or emotion, then you best look elsewhere.