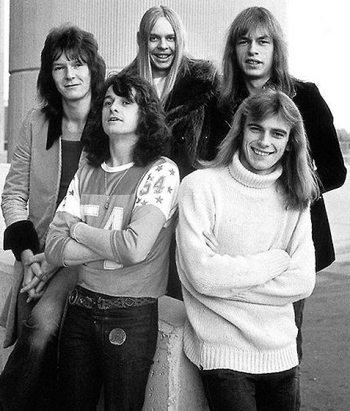 It’s time for another list that no one cares about. With films and gaming, I’ve got cred. Music… Well, this is just what I like. And what I like is Yes.

Yes started as a psychedelic band, but moved quickly into art rock, creating works of stunning complexity and beauty. They were something new and no one has matched them. It took only three albums for them to reach full mastery of the form, but such perfection lasted only 6 years and 6 albums. They fell apart in the middle of making Tormato in 1978, and while the band has existed in numerous forms up to the present day, it has never came close to what it once was. Unfortunately, I first saw them in 1983, during the horror of what was the 90125 tour.

A top 10 is really wrong for Yes, but hey, I don’t make up the rules. I could easily make this a top 20 – without adding additional albums. My 9th and 10th spots are really ties with a bunch of other songs, which I’ll give honorable mentions to: Perpetual Change (The Yes Album), Long Distance Runaround and Heart of the Sunrise (both from Fragile), Siberian Khatu (Close to the Edge), and The Revealing Science of God (sides 1 of Tales from Topographic Oceans).

After four (glorious) sides of psychedelic new age jazz, Ritual drops us into the gentle and easy to grasp Nous Somme du Soleil, and it is like all the tension of the world has been released. I admit to giving this a slight boost to get another album in the top 10, which is equally true of #9.

It seems a statement of what prog rock would be, and when I heard it (edited for radio) in 1971, there was nothing like it. It’s Howe and Anderson, playing off each other, with that unrelenting bass pounding everything into submission.

Out went Wakeman, in came Patrick Moraz, and with him, a bit of jazz to add even greater complexity. It’s about war and conflict and the extent that a band could push the limits of rock.

In case you forgot these guys could rock, here’s your reminder. I’ve tried to make sense of the lyrics. Don’t. Just go with the flow.

#6 – Wondrous Stories (Going For The One)

Something different on this list, Wondrous Stories is short, gentle, and straightforward. It’s also beautiful.

It’s half pastoral and half country rock.

Out went short-timer Moraz (pushed) to allow room for Wakeman’s return, which he used to play the organ bits in a cathedral over a phone line as the rest of the band played in the studio. Yes never did anything the easy way.

Yes nails down who they were with this multi-part, multi-layered song cycle. It leaps all over the place and does it majestically.

A masterpiece on their greatest masterpiece album, Close To The Edge takes up a full album side, and it could have gone on for another hour.

It doesn’t get better than Close To The Edge, so #1 goes to another song off that album. It’s complex as well, and goes in strange directions. It also has a melody of strange beauty.