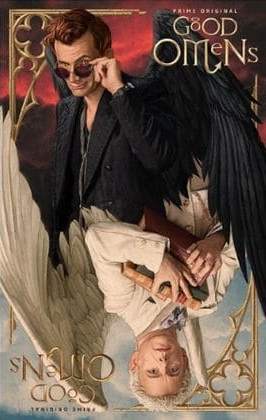 I enjoyed the Neil-Gaiman-Terry-Pratchett-based mini-series Good Omens well enough, but I was filled the entire time with the feeling that it should be more. Crowley, the not-so-evil demon is delightful, and David Tennant’s performance even more so. The interaction between Cowley and the angel Aziraphale (Michael Sheen) is a good time, though it’s mainly Cowley, and those two are the heart of the series.

The story is fine. It goes pretty much exactly where you’d expect it to go with the setup and the fluffy sitcom tone. With a darker, more satiric edge—with the Antichrist being truly evil and more insightful commentary—it could have been more interesting, but that’s not what they were going for. So, there are no surprises and it’s…fine. Which means it’s all up to the characters to carry the show, that and the jokes. And Crowley and Aziraphale do an excellent job. Cowley rules every scene he’s in, being both hilarious, heartwarming, and a touch scary. Aziraphale makes for a reasonable partner with some nice development moments.

The problem is we leave them. A good deal of time is spent with the four children, and with the witch and witchhunter, and with the witchhunter-sergeant and faux-psychic, and with the four horsemen, all to give us plot points that are obvious. And none of it is funny. Cowley and, to a lesser extent, Aziraphale have tons of great gags. The children have none. The two couples have none. The four horsemen have potential, but again, aren’t funny and give us nothing which isn’t obvious.

And there’s a lot of time spent with these “side” characters—hours. For the most part they aren’t terrible, although the insults of the witchhunter-sergeant do get old quickly, but they add nothing and aren’t amusing on their own. The omniscient view also puts us ahead of all of the characters, and we’re stuck waiting for them to catch up. Sticking to the more limited view of Cowley and Aziraphale would have made for a funnier, more intriguing, and fast moving show. It would have been better to be with Cowley and Aziraphale as they discover they have the wrong Antichrist and join them in their discoveries, instead of us knowing from the beginning exactly what happened.

I’m sounding more negative then the overall series deserves, but the negative stands out. You could even now trim out an hour of the side characters and effect nothing except making the show flow better. If done in production, giving us more of our demon and angel heroes, this could have been great. Instead there’s a lot of filler, and it is passably good.