Following from the events in Avengers: Infinity War, half of the population of the universe is gone, and the remaining Avengers, Tony Stark (Robert Downey Jr.), Steve Rogers (Chris Evans), Bruce Banner (Mark Ruffalo), Thor (Chris Hemsworth), Natasha Romanoff (Scarlett Johansson), Clint Barton (Jeremy Renner), and James Rhodes (Don Cheadle), as well as Nebula (Karen Gillan) and Rocket (voice: Bradley Cooper), are dealing with the results, and often, not dealing that well. That changes when Scott Lang (Paul Rudd), who was thought to be dead, shows up, and offers a possible course of action to undo “the snap” and defeat Thanos. Their quest takes them through a surprising number of past movie clips before reaching a very big battle.

And so the saga of the original Avengers ends with a…  No, not with a whimper. As far from a whimper as is possible. It’s sound and fury, and hopefully we’re all literate enough to know what that signifies and who it is told by. For someone like me, who has loved the MCU—finding it one of the great movie franchises, that time after time rose high in myriad ways—it is disappointing. I wanted great, and I didn’t get it. I wanted character studies and action that followed from those characters and emotions that came naturally from the characters and the situations they were placed in, and I didn’t get any of that.

What I did get was fine acting, huge spectacle, and tons of cool fan-servicey moments. If that’s what you are looking for, than you may be satisfied. But then you might as well watch Aquaman (except for the acting). Infinity War is good…-ish. It should have been more, and in so many ways it is shocking where it fell down.

I’m staying vague in this review so as not to give away spoilers as I don’t recall a film where people were this worried about them. But the joke is, it doesn’t matter. There are no big surprises, no twists, and no shocks. Take the simplest story you could have deduced (after seeing the last few films, and if you haven’t seen those, then skip this one as it’s for fans only), and that’s what you get. The only surprise is how unsurprising it all is. But still, I’ll play nice and be vague.

So, what works? If you know the MCU, you know the answer to that. We’ve got a lot of good characters, performed skillfully, who spout decent dialog that occasionally is quite good. There are a few solid emotional moments and a few good laughs. And then there is the action, which is amazing. You want a magnificent (if confusing and sometimes silly) battle? You’ve got one of the best. And as for those fan service moments, there are a bunch, including one that is as good as anything offered by the MCU up to this point. Specifics would get into spoilers, but there are quite a few engaging or thrilling scenes. The art design is a big drop from past films and it often looks a bit drab, but the film is shot well.

But everything is tugged down by what I’ll call editing. Little of the story is given any build up. Like Infinity War, this is a movie of jumps. “Hey, we need some wild tech.” Next scene it exists. “Hey, we need to find Bob.” Next scene they’re with Bob. “Hey, we need to cross vast distances.” Next scene they have. Endgame doesn’t flow. It’s a collection of scenes stitched together. And often those scenes exist only to be cool, not because they fit. There is a marvelous girl power moment, and it is marvelous and should be in the film. But they didn’t bother filming anything leading up to it. There’s no reason for it to happen and a whole lot of reasons why it shouldn’t, but there it is, stuck in, no doubt, because the Russo brothers decided it would be cool to have the scene, but they lacked the skill to fit it into the story.

And that jerking nature also plays havoc with the wrapping-up of characters’ storylines. We don’t see shifts in those characters. One will simply say “I’m going to do this” and then does it, even if it isn’t something that character would ever have done before. They end up where they end up because the Russos (or Kevin Feige) just decided that’s where they wanted them to be, not because the story led them there. And that problem messes up previous films too. Apparently the character development which was key to multiple MCU films didn’t really happen or the characters just changed when we weren’t looking.

Sounds like some substantial problems, but there are so many more. The Avengers make odd or downright stupid choices (keeping it vague, they should have gone to pick up some relatively easily attainable supplies before setting off on their main quest; also, not bothering to wait for a few other characters is simply insane and pointless). And the way they break up into teams is just bizarre (Ok, minor, minor spoiler: wouldn’t you think you’d put one of the people who knows how to fly a spaceship with the spaceship?). Sure, these characters have made stupid decisions before, but never has the gears of the franchise been so visible behind those decisions. It took over a decade, but the mega-corporation that has been behind these films is now front and center.

We also have the power-level problem that was so prevalent in Infinity War. Everyone’s strength changes moment to moment. Sometimes a punch or stab or ray does nothing and sometimes it is devastating. Is it bad to be shot? Sometimes. Sometimes it’s no big deal, and there’s no way to tell during the battle which attacks are actually dangerous.

Then there’s the tonal shifts (for the first time in an MCU movie, some of the humor feels out of place) and awkward pauses (the writers don’t have Joss Whedon’s skill at integrating important moments into exciting ones, so instead the film grinds to a halt whenever someone has something “deep” to express). And since this is a sequel, it has the often seen sequel problem: Things that were difficult or nearly impossible before are now easy. That gets into spoilers, so I’ll leave it at that.

Even with all those flaws I can’t say to skip it. The whole may be weak, but some of the parts are excellent. So for the thrilling moments, and the humorous moments, and the emotional moments, I recommend it. Those moments aren’t as thrilling or as emotional as they should have been (and easily could have been) with proper context, but they are still exciting. And if you’re going to see it, you really want to see it on the big screen where that giant battle shines.

But as the ending of the three phases of the MCU, I wish the two part film of Infinity War/Endgame hadn’t been made. These characters deserved better. 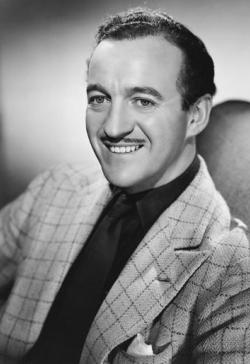 David Niven looked and sounded like the ultimate English gentleman. And he may have been. He was one of the wild young Hollywood boys, along with Errol Flynn, who partied, drank, bedded lots of women, and fought. He was in the military twice, first after college and again when Britain went to war in WWII. Of the second stint he is known to have been part of a behind the lines unit that saw a great deal of action, along with spending time making propaganda films. His rebellious side did not counter his charm, and unlike many of his colleagues, he was known to be easy to work with, professional, and friendly on set.

He was an actor who was better than his filmography. He was in a few disasters, such as the pitiful remake of My Man Godfrey in 1957 and the fascinating train wreck that was Casino Royale in 1967. While he had many lead roles, he was often cast in supporting parts; he’s the unquestioned lead in only two of his best films.

An honorable mention for the wonderful beginning and ending of Wuthering Heights (1939), though it suffers from everything inbetween. Also an honorable mention to the Ernst Lubitsch-directed/Gary Cooper-led romantic comedy Bluebeard’s Eighth Wife (1938) and the Michael Curtiz-directed/Errol Flynn-led The Charge of the Light Brigade (1936).

#7 – A Matter of Life and Death (1946) —Niven, in the lead, plays a pilot who is put on trial in a spiritual court where he has petitioned to be allowed to return to life. As a whole it’s a mid-level Film Blanc that can’t match the likes of Here Comes Mr. Jordan, but it crushes the competition on cinematography and color. It’s not a great film, but it’s a beautiful one.

#6 – The Guns of Navarone (1961) — A wartime, behind-enemy-lines, action film based on an Alistair MacLean novel. Niven is part of an ensemble, and while he acknowledged he was far too old for the part, he later decided it was one of his better performances.

#5 – Appointment with Venus (1951) — Given the drab title Island Rescue in the US, this is a charming, quirky comedy with thriller aspects. Niven, in one of his few starring roles on this list, is a British soldier sent to a small island during WWII to swipe a cow from the Nazis. Costars Glynis Johns and Kenneth More are as good as Niven.

#4 – The Moon Is Blue (1953) — A romantic comedy of words. Niven, as the the playboy father of William Holden’s ex girlfriend, finds he’s interested in Holden’s new flame. It’s a smart, fun film that gets too conventional in the end. Many consider this to be Niven’s finest performance.

#3 – The Bishop’s Wife (1947) — A Christmas classic. Niven is a bishop who has lost his way and Cary Grant is the angel who comes to help, but also makes things uncomfortable.

#2 – The Dawn Patrol (1938) — One of the finest war pictures, with Niven, Errol Flynn, and Basil Rathbone as WWI pilots in horrible situations, having heroism forced upon them. [Also on the Basil Rathbone list and the Errol Flynn list]

#1 – The Prisoner of Zenda (1937) — A magnificent swashbuckler, easily intertwining romance, humor, and heroics. Douglas Fairbanks Jr., playing one of the great cinematic villains, almost steals the show… almost. Ronald Colman stars as the twin to a king-to-be and Niven is loyal to the king, and thus, the twin. (Full Review) [Also on the Ronald Colman list]