I’ve seen multiple rankings of all the Doctor Who episodes (or just all the modern ones) recently, and they all have been horribly wrong. I know this because they don’t match mine, and mine are correct. That’s just the way the universe is. Obviously I will have to fix this.

OK, if I’m going to rank all the modern Doctor Who episodes, let’s start with the minisodes. And there are a lot of them, and many of them are hardly stories. With that in mind, I’ll skip anything that was intended as an intro or break for a film, musical production, or non-Who TV show, or anything which is a game or part of a game show. I’ll also skip cut scenes (like Born Again) or episode prequels (there are a lot of them). Few of them are required viewing in any case (only the two Lady Vastra ones that act as prequels to The Snowmen really need to be searched for). Though in some cases, the “minisode” prequel is a bit more, in which case I’ve included it. 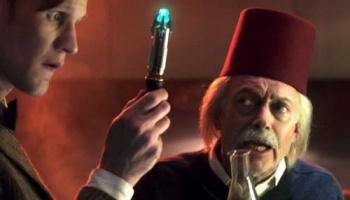 Death is the Only Answer

The Doctor meets Albert Einstein in the TARDIS. Written by school children who won a competition. Well, hard to say mean things about something written by children.

Another episode written by children. Eleven and Amy want to go on an adventure and instead end up saving the spirit of the Olympics. Yes, it is exactly what it sounds like it would be. Again, don’t want to say mean things about something written by children.

END_OF_DOCUMENT_TOKEN_TO_BE_REPLACED

It’s been one year since Eugie died. I knew it was going to happen that day, September 27, 2014. I decided it. The machines could have kept her going for longer—indefinitely I suppose. But there was no point. Her lungs were gone and cancer patients don’t get new ones. There was no point to waiting. Weeks earlier, when she was still able to fully wake, she’d told me, as best she could, that her dreams were now nightmares. She didn’t need any more nightmares.

I woke her. The doctors were not so keen on that, and had a lot of very good reasons not to do it. But I knew my wife. So I woke her. There is some question to how awake she was. She’d been drugged so very deeply, to keep her stats even so that those machines could keep her alive, and to keep away those nightmares. I’ll never know how successful they were at the second. The best I could expect on her waking was for her to be able to blink. I have my own reasons, which I will keep to myself, to believe that she did manage that. But she managed nothing more.

And then I let her go.

And a year passed.

Funny, I thought it would be such a slow year, a torturously slow year. But it has been fast. Faster than I could have imagined. Faster by far than any other year. For me, maybe a month has passed. I can’t really say. Timey wimey. There is nothing to mark the passage of time. The landmarks of life have to be important. They can be terrible or wonderful but they have to matter. And without Eugie, nothing matters. Nothing is important. So time passes without pause, without remembrance, without mattering.

Oh, there are little moments of semi-importance: her memorial; being able to talk about her at the Nebulas, and having Ursula saying Eugie should have won—thank you for that Ursula; getting together at Dragon Con in remembrance of her and picking up her fandom award. Those are as important as life is, and they are not important enough to mark the days, not without being able to tell her about them.

I don’t mind time going quickly. It isn’t something to like or dislike. It just is. END_OF_DOCUMENT_TOKEN_TO_BE_REPLACED