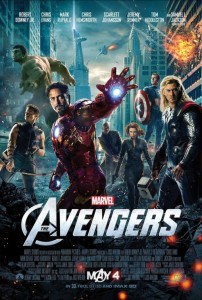 Iron Man, Thor, The Hulk, Black Widow, Hawkeye, and Captain America join together under Nick Fury’s command to save the world from Loki and an invasion of aliens.

Was there any doubt what film would end up on top? The Avengers is a near perfect action film. Whedon directs his over-sized ensemble cast as if he’s directing a symphony: a complicated flow yet with everything in its place. It seems like it is all about the action, and there is a lot, but it isn’t. It’s all about the characters. Everyone has their moment to shine.

The re-casting of Bruce Banner with Mark Ruffalo was spot on, giving us a thoughtful but troubled scientist. Better still was the crafting of The Hulk. I’d never cared much for the character, and my wife was even more disdainful—and we were won over. Though no one stood out as much as Tom Hiddleston’s Loki. After The Avengers, he is arguably the most popular character in the MSU, vying with Tony Stark for the title. He’s dangerous, but also funny and sympathetic.

With such care given to the dialog, to character development, and to emotional depth, it is surprising how Whedon is happy to go full-on fanboy and give us some of the greatest “wow, cool!” moments ever. Several of these involve The Hulk, who seems unable to avoid punching Asgardians. I’ve never heard so much cheering in a theater.

I’d love to see Marvel top The Avengers. I’m not counting on it, and if they can’t, that’s OK. There’s a lot of room under it to still be great.

Peter Parker (Andrew Garfield), whose parents disappeared while believing they were in a James Bond movie, is just your average, everyday super genius high school teenager. While attempting to connect with Dr. Curt Connors (Rhys Ifans), his father’s old one-armed colleague, he is bitten by a genetically altered spider and yada yada yada, Spider-Man, dead Uncle Ben (Martin Sheen)—you know the score. His girlfriend this time is Gwen Stacy (Emma Stone), whose father (Denis Leary) is the police captain and a jerk. And Connors becomes a giant evil lizard, because every adult Peter knows turns into a super-villain.

It is hard to get past how unnecessary The Amazing Spider-Man is. No one needed a second telling of Spider-Man’s origin story in ten years. I wasn’t all that fond of Raimi’s trilogy, but that didn’t mean it needed to be redone. If we were stuck with a reboot, did it need to be one made up of piece of Raimi’s Spider-Man films? Raimi had already run the same basic story into the ground, but here it is again.

If you want to see scenes you’ve seen before, you’ll get to. We have the Uncle Ben speech and his death. We get Peter breaking things and learning to swing. We get confrontations with the villain that are re-writes from the earlier films. We get the girlfriend rejection scene. We’re even given the working-Joes of New York all getting behind Spider-Man just like in the 2002 film. This is not the place to look for anything new.

If Sony insisted on doing it all again, they should have tried to do something—anything—better. Instead they once again failed with humor (Spider-Man is supposed to be funny) and gave us characters I am excited to ignore. Every second of family melodrama is unpleasant and there is a lot of family melodrama.

And they can’t get Peter right. At least this 29-year-old actor looks a little younger than the 27-year-old they tried last time. Too old, but better. They missed on “dweeby, average teen” as well as this Peter is handsome, agile, cool, and intelligent. Not just intelligent, but Einstein-was-an-idiot level of intelligence. And he’s the greatest tailor in the history of mankind. If they wanted to tell a story about this very special guy, that’s fine; rewrite the story so that it isn’t about a teen with regular problems growing up. This Peter is not someone with regular problems. Peter does now have an unnatural stutter. I’m guessing this was their nod to making him uncool. It doesn’t work but it is annoying.

The villain is a composite of past villains, without any concern for if that makes sense. He’s Doc Octavius—friendly to Peter, acting as a minor father-figure and, of course, being a super scientist. He suddenly finds his funding being taken away and his life’s work taken, so he tests his untried, super serum on himself, exactly like Norman Osborn. He even starts raving to himself like the Green Goblin. And like the Goblin, he figures out who Spider-Man really is and goes after him.

They added an espionage side-story that ran on into the sequel but never arrived anywhere. Maybe if the super secret spy Parkers had a purpose. Or maybe if Uncle Ben was less Yoda.

Andrew Garfield had potential, if he’d been allowed to play an age-appropriate Spidey. And been given a script that had any reason to exist. The film’s colorful and the FX is OK. And that’s about it.

It was followed by The Amazing Spider-Man 2, which killed the franchise, and forced Sony to make a deal for Spider-Man to appear in the MCU, starting with Captain America: Civil War and then Spider-Man: Homecoming.